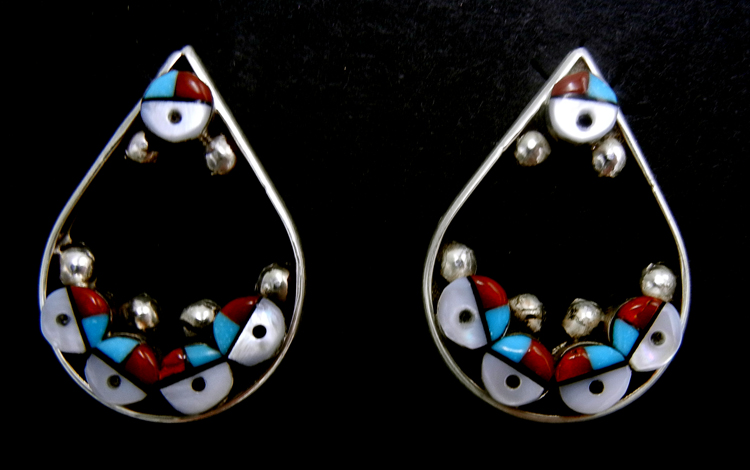 When it comes to Southwestern Native American jewelry, there are many more stones than just turquoise that are indigenous to the surrounding environments of the Pueblo communities. Apart from real turquoise jewelry, stones such as jet, coral, mother of pearl, and lapis lazuli are also commonly found in the arid regions of the southwestern United States.

Learn more about these stones and why they are so significant to Native American jewelry-making below!

Surrounding the Acoma Pueblo region in modern-day Utah is a large deposit of Jet- a glasslike black stone. Jet is derived from the organic components of wood dating back for centuries. This stone is often used in silver inlay of Native American jewelry from the southwest and is also often the material from which fetishes are carved.

Another stone that has organic origins, red coral is derived from a genus of marine corals and displays an intense red hue. Throughout history, it has been used not just by the Southwestern Pueblo tribes, but also in ancient Egyptian and Roman cultures. Pieces from the Zuni jewelry tradition often use coral with turquoise and mother of pearl in their inlaid pieces.

Also, knowns as nacre, mother of pearl is a composite material produced by mollusks as a protective layer of their inner shell against harm from parasites. This material can be iridescent in color with a rainbow hue or also white and silver. This stone is also often used in Zuni pieces and paired with other bright stones.

Lapis Lazuli is characterized by their deep blue hue with flecks of gold and silver. It can be found across the world from Egypt to Argentina to Pakistan, however, in the United States, it is primarily located in Western Colorado. It’s believed by many different cultures to have great spiritual significance and has been a valuable stone for centuries. In Native American Pueblo jewelry, lapis lazuli is often paired with silver settings to frame its deep and beautiful hue.

At Palms Trading Company, we have a wide variety of southwestern Pueblo jewelry which showcases many different types of stones and inlays. We have not only real turquoise jewelry but also beautiful jet, coral, and lapis lazuli pieces as well. If you’re looking for help with which new piece to choose, let one of our personal shoppers support you with finding the perfect addition to your jewelry collection. Give us a call for your next piece of authentic Native American jewelry today!