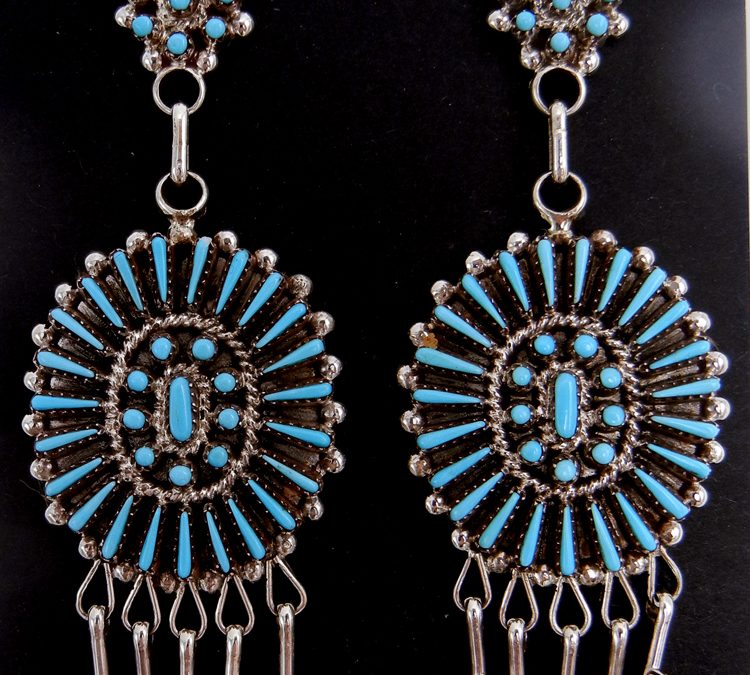 When it comes to turquoise jewelry, for many people, the first and most natural association is with the Indigenous Pueblo tribes of the Southwestern United States. For centuries, craftspeople from this region have constructed beautiful and intricate pieces of turquoise jewelry, from turquoise rings for women, to turquoise pendants,cuffs, and even as adornments on bolo ties. While turquoise can be seen as a staple throughout the jewelry traditions of many Pueblo tribes, the meanings and symbolism that the stone imbues are actually quite varied. Read on to learn more about the different spiritual properties ascribed to turquoise by Native American Peoples across the United States.

The Zuni People are the traditional caretakers of the land close to the Zuni River valley in what is now western New Mexico. They are widely known for their skillful craftsmanship when it comes to turquoise jewelry. A few designs commonly seen that involve turquoise are the stunning necklaces or bolo ties – which also often include thunderbird or sun design detailing – as well as the intricately carved needlepoint and petitpoint stonework. For the Zuni People, turquoise is associated with the land itself, and the different hues of turquoise are also traditionally associated with different genders – blue turquoise is more commonly connected to men, and green turquoise is more commonly linked with women.

The Navajo Nation includes portions of modern-day northeastern Arizona, southeastern Utah, and northwestern New Mexico, a region in which natural turquoise has been widely available for generations. Among the Navajo People, turquoise is known to bring good fortune to the owner and was commonly given to warriors of the community for protection before the battle. Turquoise was also seen as a sign of respect for the goddess Estsanatlehi and was commonly worn in earrings and pendants during the coming-of-age ceremonies.

For hundreds of years, the Apache tribe dominated much of Arizona, northern Mexico, New Mexico, and Texas. Historically, turquoise was viewed by Apache communities as a representation of strength and skill. Apache hunters would attach pieces of turquoise to their bows to strengthen their aim and help them become precise and invincible hunters. In Apache tradition, turquoise was also commonly associated with the rain at the end of the rainbow.

Turquoise jewelry makes an exceptional gift not only because of its beauty but because of the deep and meaningful history and symbolism behind each piece. If you’re looking for an intricate and symbolic piece of turquoise jewelry, check out the amazing selection we have to offer at Palms Trading Company. We build strong relationships with local Indigenous artists to ensure that each piece is both authentic and beautifully crafted in a tradition that is unique to the artist’s background and culture.