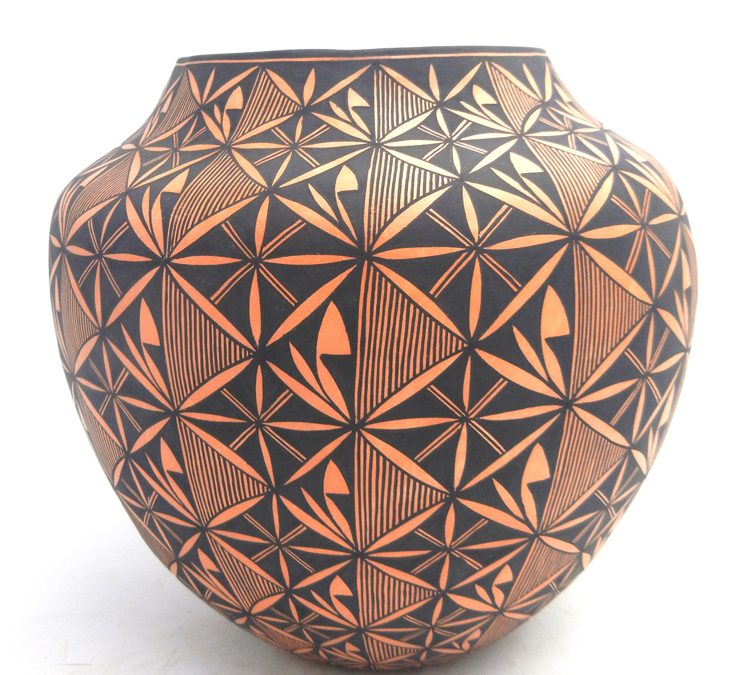 Acoma Pueblo is situated around an hour west of Albuquerque and is home to some of the oldest Indigenous communities in North America. Also known as “Sky City,” Acoma Pueblo is the birthplace of the world-renowned Acoma pottery. Documentation of this beautiful art form dates back to 1150 AD. The techniques used for its creation and its distinctive decorative elements make it one of the most widely known and popular types of Indigenous North American pottery.

Originally, Acoma pottery was created for specific functional purposes. Large pots were used for cooking, jugs were crafted to hold water on long trips, and jars and bowls were used for storage purposes. Pieces were hand-painted, and glazes were also used. However, in the late 1600s following the Pueblo Revolt, limited access to mining sites made finding the correct minerals for glazing a challenge. Because of this, the decorative elements of Acoma pottery often took on a more natural matte-like finish.

With the rise of new technologies in the early 20th century, traditional hand pottery crafting became less common amongst the Pueblo tribes. However, Acoma pottery techniques continued to be passed on by individuals credited for keeping the tradition alive. Those individuals are often referred to as the Four Matriarchs of Acoma pottery, and they maintained the traditional methods of collecting clay, shaping, carving, and firing.

Traditional Acoma pottery draws on the usage of clay that is local to the Acoma Pueblo region. The unique clay used is extremely strong even after firing, allowing pottery pieces to maintain thin walls and rims that are often fluted. The traditional https://canadianpharmacy365.net Valium products crafting method of Acoma pottery is hand coiling- the process in which artisans create a long snake-like rope of clay, build the walls of the piece through coiling the clay vertically on top of itself, and then smooth out the walls of the piece with a flat shell or rock.

The pieces are pigmented using crushed minerals in a paste form and are traditionally fired through an open fire pit.

The decorative elements of Acoma pottery commonly feature polychromatic geometric designs with naturally pigmented colors. Patterns like hatched lines are used to symbolize environmental elements such as rain or patterns that allude to things like flowers or plants. Other elements such as birds or weather features like clouds and lightning are also commonly depicted, as well as fine lines which represent rain.

At Palms Trading Company, we have a wide variety of beautiful pieces of Acoma pottery available for both the new admirer and experienced collector alike. For those who aren’t quite sure what they’re looking for, we have an excellent personal shopper service on hand to help you find the perfect piece. Get in touch with us today and let us help you choose a beautiful piece of Acoma pottery for your home.