Zuni Fetish Carvings and Their Meanings

Zuni Fetish Carvings and Their Meanings 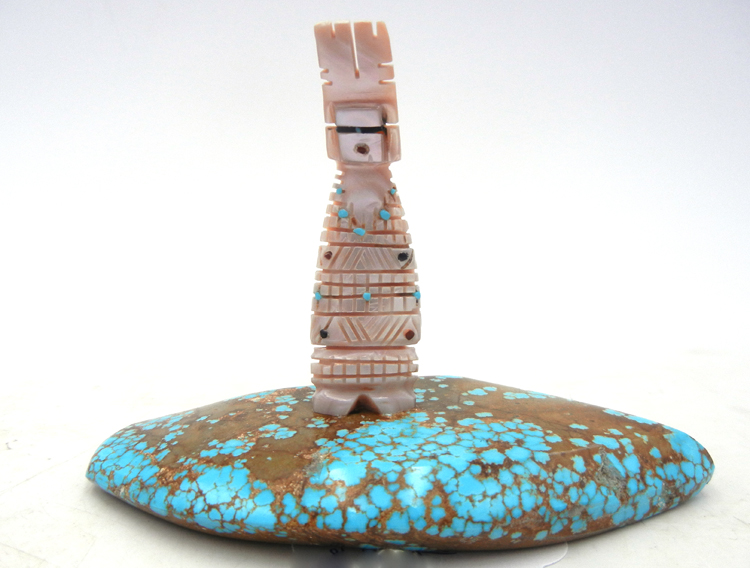 Today, the Zuni Pueblo is located directly west of Albuquerque, reaching the eastern Arizona border. The Zuni people have an intricate religious belief system and prolific art history behind them that revolves around nature and animal spirits. The Zuni Pueblo of New Mexico is famous for its highly detailed, handcrafted jewelry and artworks, especially their culturally significant stone fetishes.

The Zuni people are some of the most profoundly spiritual individuals in the Southwest and steadily engage in devotional and religious activities. Their cultural identity and traditions are deep-rooted in the earth, the forces of nature, and spirits, which can be traced back to even before 1500 BC. It is their strong conviction that the spirit world be an integral part of their everyday lives and that all things are interconnected. The indigenous tribe believes in an array of animal spirits, deities, and supernatural beings who govern every aspect of life. They also believe that everything on this earth has a spirit, energy force, or essence, including people, plants, animals, natural phenomena, mountains, and even pebbles.

The Zuni people have a long, incredible history of creating art to honor their gods and spirits. The unique fetish carvings that they create are made to preserve traditional culture within their communities and to honor these spiritual beings.

The word “fetish” comes from the Portuguese word, Feitiço, which means “charm” or “relic of a saint.” It is believed that a fetish is not a mere object, but an object imbued with special powers or properties. In the case of Zuni fetishes, they are thought to have immense mystical powers, to possess miraculous healing properties, and to represent powerful guardians, protecting us against evil spirits and bad luck. These carvings have been handed down through generations of the Zuni tribe and are used in rituals and ceremonies.

The belief that each animal had its own spirit and could help or protect the wearer led to the creation of many different styles of Zuni jewelry and fetishes. The Zuni people’s pottery designs also often feature animals, such as lizards and deer, because they bring good fortune, protection, and healing to those who wear them. The Zuni people believe that the spirit of an animal is present in each piece of fetish they carve.

Zuni fetish carvings are made from various materials, the most common being turquoise, coral, wood, shell, stone, and bone. As more contemporary Native American artists have begun to create Zuni fetishes, other materials have been used to create these fetishes, mainly other types of stones such as malachite, marble, travertine, and serpentine.

Most fetishes do not require much protective care. Usually, the other materials used or attached to the fetish are what require active care, referring to the feathers and leather that some fetishes adorn. Feathers should be dusted incrementally and lightly with a smooth cloth, and the leather must be kept away from water to preserve its shape and look.

Fetishes/Animals of the Six Directions

In traditional Zuni culture, there are six major animal spirits that protect people from evil forces in their lives and grant them whatever property the fetish represents. Each animal represents a particular direction and has its own unique meaning and purpose in life.

The Eagle – Guardian of the Upper Regions

The eagle is the guardian of the upper regions and acts as a messenger to the heavens, between humans and Gods. The eagle represents great power, balance, and grace, but only by the gaining of knowledge and hard work.

The Mountain Lion – Guardian of the North

The Mountain Lion, also known as the Guardian of the North, has been a useful fetish to the Zuni Pueblo because it represents intuition, resourcefulness, and the ability to lead others. This spirit animal is also used for protection and luck in hunting, due to its protector, hunter, and tracker status.

The Badger – Guardian of the South

For Zuni tribes, the badger is a spirit animal that guards the South and represents passion, groundedness, and connection to the physical Earth. Due to its connection and residence in the earth, it has a deep understanding of the healing properties that the earth offers and can impart that healing onto those who choose the badger fetish.

The Wolf – Guardian of the East

The wolf is a fierce predator that guards the East and represents loyalty, family, and truth. Due to its predatory nature, it makes a perfect choice for bringing luck to hunting and providing protection. Due to its pack mentality, the wolf also facilitates family unity and reinforces family bonds.

The Bear – Guardian of the West

The bear is seen as the guardian of the West and epitomizes stability, perseverance, strength, and courage through trying and dire situations. The bear is known to be an extremely powerful creature, but also a creature of high wisdom, which can prove useful in situations where healing is needed. The bear provides you with the strength, wisdom, and healing properties to conquer any obstacle in your way.

The Mole – Guardian of the Lower Regions

The mole spirit is the guardian of the lower regions and acts as a bridge between the upper and lower regions. It is said that this carving connects ancestors and spiritual guides from other realms and enhances one’s ability to perceive subtle energies, normally hidden from view. It is a powerful ally for those who desire to be more drawn to the earth and desire to be more spiritually aware of one’s self and the energy around them.

Every Zuni fetish carving can offer something uniquely different, based on what they represent. The above examples might be the most common, but a large number exist beyond these and can bring something different to your life.

Regardless of the fetish carving you possess, you procure an authentic piece of Native American history rooted in the history and culture of past generations. To learn more about other handcrafted Zuni fetishes or to purchase your own, contact Palms Trading today.