The Unique Art of Cochiti Pueblo

The Unique Art of Cochiti Pueblo 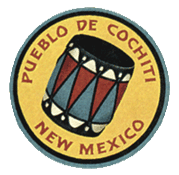 Every Pueblo in New Mexico has its own rich history, culture and artistic traditions, and Cochiti Pueblo is no exception. Many Cochiti Pueblo members make their living by selling their art, which includes pottery and jewelry like many other Pueblos. However, Cochiti also has art forms that are unique to it that are either admired by other Pueblo artists or have been adopted and added to their own traditions.

Drums are part of nearly every Pueblo’s ceremonies and dances, but most Pueblos do not make their own drums—they get them from the drum makers of Cochiti Pueblo.

Cochiti drums are crafted from hollowed logs, usually aspen or cottonwood—trees native to the high desert climate. Cow hides, which must often be acquired from other Pueblos, ranches or towns, are stretched across the hollowed log and fastened with leather laces. Different cow hides create different tones, and experienced Cochiti drum makers know the characteristic sounds of different cattle skin types. Drums may also feature traditional artwork on the stretched hide.

Drum making is an artistic tradition among the Cochiti people; it is a craft that is passed down from generation to generation, often from father to son. Cochiti drum makers often have special tools to clean and shape the logs and hides that are passed down among family craftsmen as well.

The Cochiti people have a special relationship with the drum. Drum making is the way many artists make a living. However, the Cochiti people recognize a difference between drums made for trade or sale and those made for ceremonial purposes. Ceremonial drums are the property of the entire Pueblo, not just an individual or family. These drums are never sold.

Cochiti Origins of the Storyteller

While the drum is almost exclusively recognized as a Cochiti art form, the storyteller is not so commonly associated with just one Pueblo. The storyteller has been adopted and adapted by potters from a number of Pueblos, including Acoma, Isleta and Jemez. However, the first storyteller was the creation of Cochiti potter Helen Cordero. Cordero created the first storyteller figurine† (see left) in 1964 as a way to commemorate her grandfather and his role as the oral historian of the family. A number of features common to each storyteller captures the importance of the oral tradition to Native American Indian culture—the open mouth and the presence of one or more listeners, which may be human or animal. Storytellers may also highlight other traditional art forms like jewelry, pottery and baskets.

The unique art forms of Cochiti Pueblo are a valuable addition to any collection of Native American Indian art. Palms Trading Company carries a selection of authentic Cochiti drums and storytellers. Many of these items are available in-store only. If you are unable to visit our Old Town Albuquerque location, you may still browse our in-store selection with assistance from a Personal Shopper. To use this service, please contact us or call (505) 247-8504