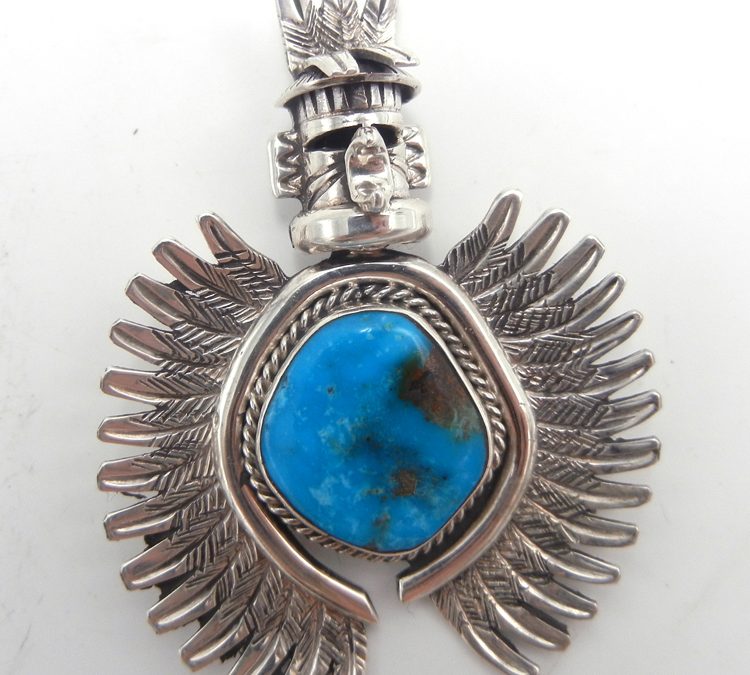 For thousands of years, turquoise has played a significant role in the communities and cultures of many different people across the world. From the Ancient Egyptians to the Persian Empire, turquoise has held a deep spiritual meaning both as a talisman of protection and a symbol of wealth and status. Perhaps one of the most widely known uses of turquoise in the modern era is in Native American jewelry, particularly jewelry of the Pueblo tribes along with the Navajo nation in the Southwestern United States.

In the modern era, turquoise might be viewed as having some common spiritual elements, such as bringing the wearer tranquility and good fortune. However, it’s important to acknowledge that for the Indigenous tribes of North America, the meaning and more profound symbolism of turquoise is intricately connected to each specific tribal context and culturally significant legends and beliefs. Turquoise can change color depending on its environment and is often viewed as a living stone, meaning that even its appearance is geographically significant. When it comes to turquoise, there is no blanket significance to Native American cultures, and different tribes ascribe different meanings to turquoise depending on various cultural contexts.

Acoma Pueblo: In Acoma Tradition, the Creator Iatiku taught the Acoma People the practice of making turquoise and shell beads. Historically, these beads were said to hold great power and imbue the wearer with attractiveness, making them beloved.

Navajo: Turquoise plays a prominent role in Navajo legends and is said to have formed as a result of human tears that seeped into the earth after the end of a long drought. In Navajo tradition, turquoise is said to represent life and the connection between earth and sky, and Navajo families would also store turquoise in baskets or hanging from the ceiling as a talisman of protection from evil.

Hopi: According to tribal lore, for the Hopi Peoples, turquoise was viewed as the excrement of the lizard who commonly traveled both above and below the earth. Because of this, Hopi miners would carry the stone to protect them and give them strength as they also traveled above and below ground for their work.

Ojibwe: In Ojibwe culture, dreamcatchers are common creations hung close to where children sleep and act as talismans to protect them from nightmares. One particularly famous dreamcatcher design includes a turquoise “spider” inside it, and this design has become widely popular and reproduced by many North American artists.

If you’re looking for authentic and beautiful Native American turquoise jewelry, you should check out our amazing selection at Palms Trading Company. We build strong relationships with local Indigenous artists to ensure that our pieces are not only breathtaking but that the designs and craftsmanship are also deeply rooted in tribal history and culture. Get in touch with us today and let one of our professional staff help you find the perfect piece to add to your collection!