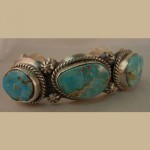 As one of the premier traders of Native American Indian jewelry, Palms Trading Company has a very large selection of handmade turquoise jewelry crafted by Pueblo and Navajo artists.

Still, the use of turquoise in jewelry is not a modern innovation. The energetic and healing properties of turquoise have prompted its inclusion in jewelry creation for centuries.

Turquoise is woven into the belief systems (and superstitions) and of many ancient and modern cultures and spiritual practices. Beliefs surrounding the energetic and healing properties of the stone go back to Biblical times and span the world:

In Middle Eastern cultures, turquoise was thought to ward off the evil eye.

In Asian cultures, it was believed that turquoise could heal a great number of illnesses, including cataracts and ulcers.

In Europe, turquoise was thought to have properties of healing and divination. Turquoise was also believed to protect horses and their riders from illness and injuries.

In South and Central America, turquoise represented supreme authority, so it was often used to decorate ceremonial masks, images of the gods and as offerings to the gods.

In North America, Native American Indians called turquoise the “fallen sky stone” or “water stone”. Owning turquoise was a sign of wealth, and the stone was thought to bring happiness, healing, good luck and favor with the gods.

Turquoise could be carved into figurines and amulets, crushed or made into beads that could be carried or worn; it was a highly prized talisman of royalty and leaders throughout the ancient world. The importance of turquoise to these ancient peoples assured the stone a place in traditions that were passed down over the centuries.

Although many of the superstitions of antiquity have fallen away, the energetic and healing properties of turquoise are still recognized in modern times. All shades of turquoise—blue and green—provide strength, protection, wisdom and positive thinking. Turquoise is also believed to encourage:

The healing powers of turquoise and its ability to encourage well-being help maintain its place as a highly-sought stone.

The Use of Turquoise in Jewelry

In North America, turquoise jewelry began as a string of small pieces of turquoise strung into necklaces or set as mosaics in wood, bone or shell. In fact, these jewelry styles survive in modern Pueblo jewelry, particular in the work of Santo Domingo artists. Silver jewelry was originally introduced to the Southwest by the Spanish in the mid-1800s, but the styles of jewelry popular today did not develop until the middle of the nineteenth century.

Today, turquoise is still mined and used for jewelry-making purposes around the world as much for its beauty as it is for its energetic properties. Palms Trading Company carries a large selection of authentic Native American Indian jewelry that features turquoise stones set in sterling silver bezels, incorporated into intricate inlay patterns and fine needlepoint designs.