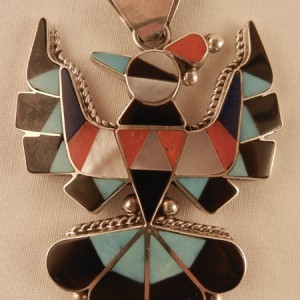 At Palms Trading Company, many of the pieces of handmade jewelry and pottery in our inventory are decorated with beautiful patterns. Most of these patterns have historical and spiritual significance to the artists and to their Pueblo. The patterns symbolize important themes and beliefs, both spiritual and mythological.

Such is the case with thunderbird and lightning patterns.

The thunderbird is a myth—and pattern—that is found throughout Native American Indian cultures and beliefs across the United States. In the Southwest, the Navajo have a legend of Tes’na’hale, which is known to be a large bird that looks much like an eagle that once carried a warrior to a ledge on Winged Rock (also known as Shiprock). The Pueblo peoples also have a legend about a large bird, the Achiyalabopa, that has razor-sharp feathers.

In New Mexico, the volcanic peak of Capulin Mountain is associated with the thunderbird legend. The mountain is named for the choke cherries that grow there (capulin means choke cherry in Spanish). However, there is another legend that tells of a young Native American Indian named Capulin. He witnessed his brother kill the guardian of the volcano, a thunderbird, which caused the volcano to become violent. He threw himself into the volcano to quiet the eruption, sacrificing himself to save his people.

The thunderbird and its spiritual meaning go back much further than even the Pueblos, however. Petroglyphs carved by the ancestors of today’s Pueblo peoples feature “spirit helpers” who were the intermediaries between spiritual leaders and spirits.

Lightning is a pattern seen often in Pueblo art. It is commonly associated with the Avanyu, or water serpent. Both symbolize the importance of storms, rain and water to an agricultural society living in the high desert.

Thunderbird and lightning motifs can be seen throughout Pueblo pottery and jewelry. Take this multi-stone inlaid thunderbird pendant by Zuni artist Delwin Gasper:

This thunderbird is a traditional pattern with wings outstretched and head to the side. 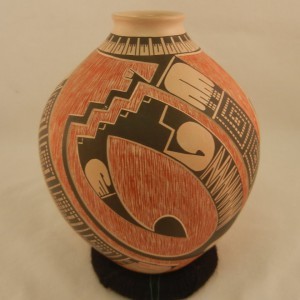 The above Mata Ortiz vase by artist Tavo Silviera features a lightning pattern similar to the patterns you would find in Pueblo pottery. The lightning is featured with wind swirls to illustrate the wild appearance of a thunder storm in full fury.

If you’d like to see more jewelry or pottery with the lightning or thunderbird motif, you can visit us in our store or online! We’d be happy to help you find what you need.