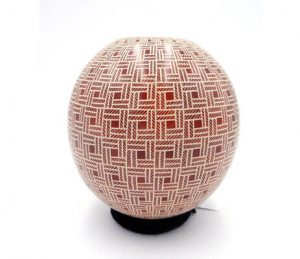 Written by Palms Trading owner Guy Berger, today’s blog features a fascinating exercise in exploration and comparison of ancient and modern pottery styles and designs between Mata Ortiz and Acoma Pueblo. In his own words: “Paquime’ was an old village in northern Mexico that existed from the years 1200-1540 AD, very near the modern day village of Mata Ortiz. Acoma Pueblo sits 50 miles west of Albuquerque in New Mexico.  Exploring the

Having been involved in buying and selling Native American pottery for the past 30 years, my eye instantly recognizes how many of the designs in both Mata Ortiz and Acoma Pueblo pottery resemble each other.  The most common design similarity between the two styles is the bird.  Since it is known that the Paquime’ people raised macaws, and there are stories handed down about Acoma Pueblo people following parrot-like birds to find water, I believe this is strong evidence for correlating the designs of the two places.  It follows that much of the contemporary Mata Ortiz pottery patterns depict this most interesting bird. 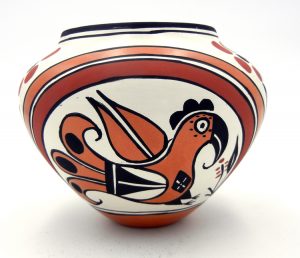 Paquime’ people created pottery unique to their part of the world, and decorated the pottery with designs from things in their world.  In many aspects, Paquime’ looks like a Southwestern Pueblo, with multistory adobe room blocks bordering communal plazas and pottery that is clearly part of Southwestern polychrome tradition.  In other ways, Casas Grandes is an enigma.  Ball court, monumental architecture, a stratified social hierarchy, macaw breeding and ceramic effigies all suggest Mesoamerican influences.  This reference to macaw breeding could help us explain the designs found on pottery shards among the Paquime’ ruins. 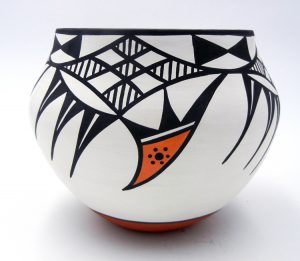 The bird motif in question was done in many different varieties, but has the same basic design elements.  Some are easy to spot, while others take a while to see within the entire pattern.  Most bird patterns have semi-circle ending in a point, signifying a beak.  As you follow the curves around it is noticeable that there is a light dot surrounded by darker lines to represent an eye.  This is evident on Acoma pots with stylized bird designs as well.  Some pots show even further development of the bird with abstract feather designs for both wing and tail feathers. 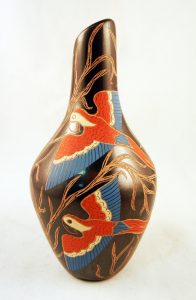 In my exploration of these two styles, several questions swirled through my mind. Were the designs I was seeing on the Mexican pottery connected to the New Mexico Pueblo pottery?  How did the figures come to be so alike?  How did the ideas transfer through Mesoamerica?  As I looked at these unique similarities, I wondered how the designs came to take on some of the same characteristics, yet be separated by such great distances.  Could it be that the “Acoma Parrot” and the Paquime’ macaw is one and the same?  Could the Spanish explorers have traded for these unique birds on their way through Mexico and exposed the Acoma people to them?  Were these the same birds from Acoma in a story told to me by Barbara Cerno, a well known Acoma potter, about how the elder Acoma ladies followed colorful birds each morning in order to find water?  What other ways could the design have traveled through Mesoamerica?