The Tale of the Corn Maiden - Palms Trading Company

The Tale of the Corn Maiden

Home  /  The Tale of the Corn Maiden

The Tale of the Corn Maiden 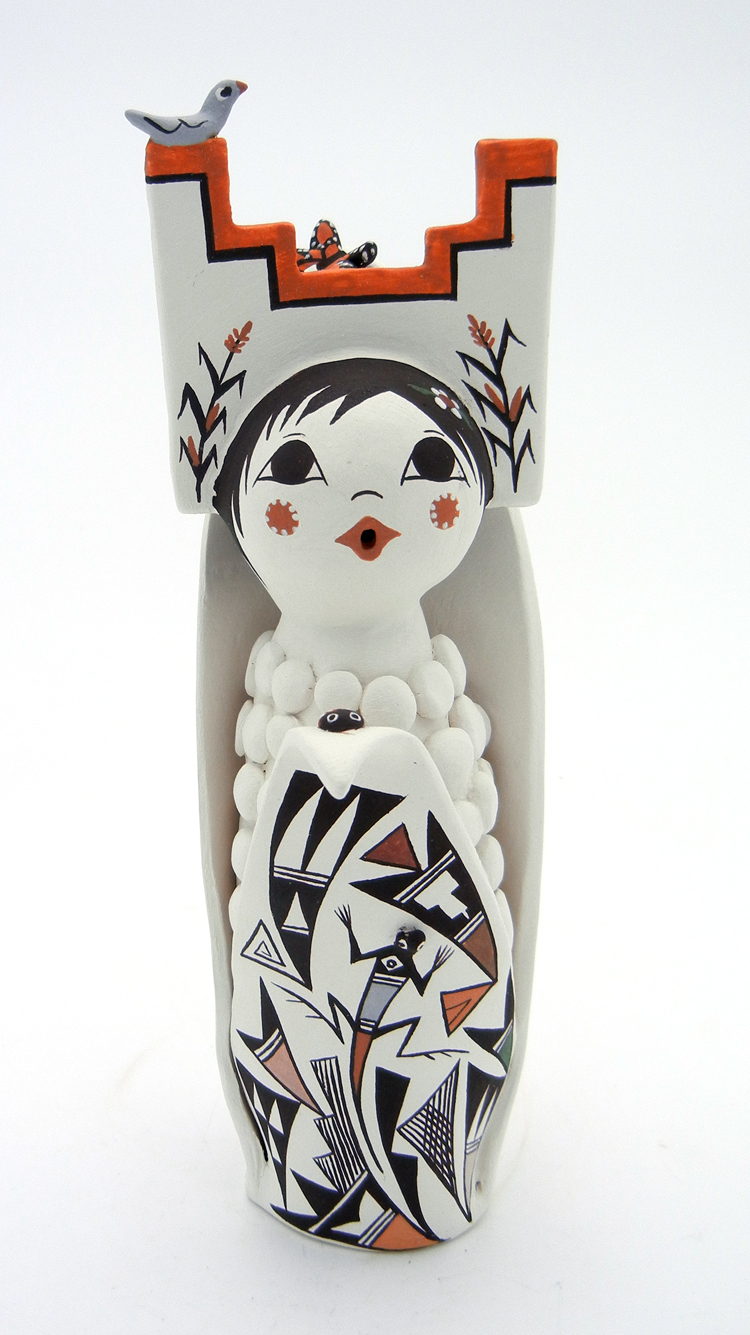 A story written by Isleta Pueblo carver Andy Abeita, this piece explores the Tale of the Corn               Maiden, and the importance of both the figure and all she represents in Pueblo Native American   culture.

In Pueblo Indian culture, there have been numerous versions of the tale of the Corn Maiden.  The fact of the matter is, throughout the history of Native American culture on both continents, North and South America, corn has been a main food source for the native communities since time unknown.

The stories of corn are of appreciation for this gift from the Great Spirit.  The story that I am about to tell is one of many told in the pueblo villages that I call home in New Mexico.

As in most religious interpretation of culture and spirituality, I feel that it is imperative that the reader understand that the story being told is one of personal interpretation.  It is a combination of several versions that I have heard from the elders from some of our villages-Isleta, Hopi, Santo Domingo, Jemez.  I have personally been involved in our religious activities since age seven, when I first arrived home to Isleta Pueblo.  I was born in Chicago and lived in Calgary, Canada until that time.  I spoke only our native tongue, Tewa (Isleta) and French to that point.

It was quite an inspiration in my life to be able to travel with my grandfather to many of our Pueblo villages and to have been able to learn other native languages in our culture, as well as to be able to see and feel the beauty and rhythmic harmony in which our native tongue communicates with life.  Though I am not a linguist, I have not found the English language to have the same communicative ability that our American Indian language possesses.

Always remember that our traditional life, being essentially our social life, is a mere extension of our religious beliefs.  Whether in an art form or in the form of literature, traditional Native Americans purvey on to the world this extension-their understanding of their world through their cultural eye.  In short, I hope that this story, as well as any of the other culturally based translations I write or speak of, are taken in the best of spirit.

In the beginning, when the Great Spirit had given life to the universe, he created all things of this earth for its inhabitants and together they would share equally its beauty and become a part of the cycle of life.  As we know, man is the only life form of this universe capable of committing true sin or true error in life.  And man, possessing this ability, needed many forms of guidance.  For man to better understand these gifts of life, the Great Spirit gave unto us many representations of his love and power through nature.  Many of these forms came to us through the earthly forces of universal visions spread across the night sky.

The Corn Maidens are said to have been a necessity created by the Great Spirit in the palm of his right hand.  Recognizing that man was vulnerable to the Earth in that he could not easily determine what life forms would sustain his body, the Great Spirit dictated that each Corn Maiden created would come in the presence of each clan and offer them one seed of corn.  He instructed that this seed would give them all that they would need.  He informed them that with love like that given to a child, this tiny seed would sustain the entire tribe forever.

Soon, this seed emerged from the soil-at first slender and fragile, much like an infant.  Then it began to grow with beauty, love and strength as if taking the form of a child.  With much guidance from the wind, from man’s touch, from man’s prayers and from his heart, it grew tall and strong.  As unbelieving as the people once were, they now began to see the essence and the beauty of the message.  With much of the skepticism overcome, the people were then able to open their hearts and strengthen their faith.  At that point, in an almost synchronistic manner, as the people began to open up and trust, so too did the mature ears of corn begin to appear.  From that point on, the Corn Maidens would be with them as God is with them, in spirit only.

It is said that the Corn Maidens were woman images that were beautiful and their beauty was stunning to the men who witnessed them.  Many of the men had aspired to have the Corn Maidens for themselves, but to no avail.  When the Corn Maidens recognized that there may be trouble because of this, they asked the Great Spirit what they should do.  He instructed them to take one of the sacred images of the kachina, and to place its image upon their head.  Once they did this, when they went to each village, the men did not recognize one Corn Maiden from the other, so they would not pursue a maiden without knowing which one she was.  Perhaps you will notice this in many of the art or craft images that you see in native art work; there are many versions of what the maidens look like, and this is possibly why.

Reprinted with permission from the author