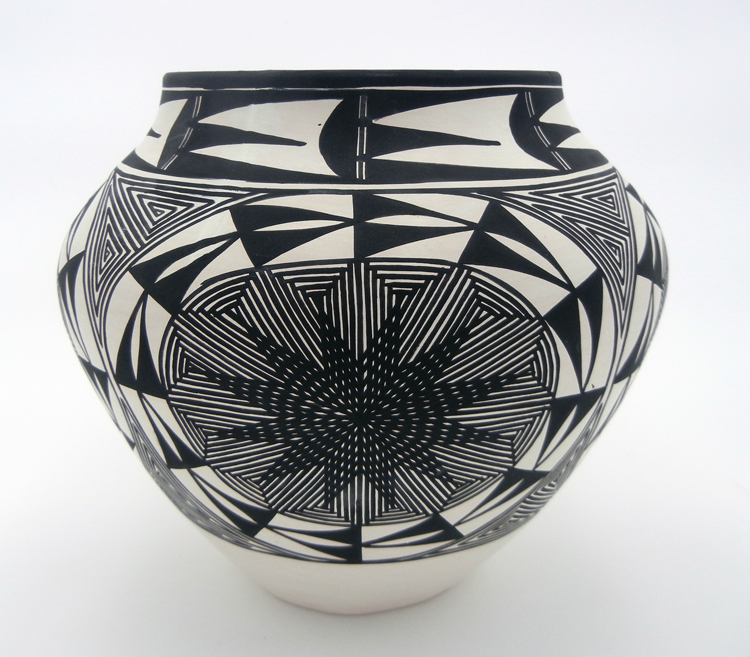 Symbols are an integral part of all cultures. Whether we think about symbols tied to religion, literature, poetry, architecture, ethnicity or art, each has a special and important significance. Symbols convey a specific and unique meaning that is of the utmost importance to those communities using them.

In the world of Native American art, as in other cultures, symbols are passed from generation to generation. All the symbols we see are either associated with the simplicity or struggle of everyday life, spirituality, or a combination of both. Many of the symbols of normal life are related to water, rain, snow, foodstuffs, and animals-both domestic and wild. Spiritually, symbols typically address birth, healing, life-balance, death and the afterlife.

One of the mistakes most people make when trying to analyze the meaning behind specific symbols is to read too much into them. As you will see in the following paragraphs, meanings are often delightfully simple and easy to interpret.

In most Native American cultures, history has been and continues to be passed down through the ages by word of mouth. Taking this into account, original meaning could have easily been changed as they passed through time. Therefore, today, we must rely on the artist to provide their interpretation of a particular symbol.

When I have a question as to the meaning of a certain symbol, I’ll ask the artist to explain. Usually, the answer is very close to the historic meaning however, in some instances, variations are discovered. The on-going evolution of designs brings excitement to discovering the meaning of the ever-changing symbols.

Many of the pieces of pottery from Acoma Pueblo incorporate a “fine line” design. Fine line designs are long lines drawn closely together, signifying rain falling from the sky and, in some cases, water.

The second most common design from Acoma is the Parrot or Rain Bird. Barbara Cerno, a well-known potter, who works with her husband Joseph. “The parrot is a special bird who we consider to be a leader. When the Spanish foreigners entered the American southwest, they brought with them parrots. One time, as energetic parrot got away from its owner and flew away.  After a few days, the ladies of Acoma noticed the bird flying around. In addition, they noticed the bird going in the same direction every day, and landing in the same place. Curious, they followed the colorful animal to the place where it landed and discovered a water hole with clean cool water flowing into it. Ever since then, the parrot appeared on many of the ollas (jars) that the women carried on their heads to transport the water to the village.”

Jemez Pueblo pottery also includes many symbols. Kiva steps are symbols that look like stairs. The steps usually represent three levels: birth, life, and death (after-life). Another common symbol used, the hummingbird, signifies beauty and new beginnings because of the intricate colors of its feathers and its return in the spring.

Jemez Pueblo potter Esther Cajero told us two enchanting stories years ago regarding Jemez symbolism. The first,  about the Friendship pot, and the second, about the storyteller symbol. Friendship pots are made by molding little clay people and affixing them to the pot so that they appear to be looking in from the rim of a bowl. “During rainy days, before running water, Pueblo people would take post outside to gather water. After a rain shower, friends would gather around the rain pot to see how much water accumulated, sometimes holding hands or facing each other, talking, laughing, and sharing stories of love and harmony as a way of life.” Turtle designs, commemorating water and life, are frequently used on Friendship pots.

In regard to the storyteller, she said “During the long winter months when the animals and people are quiet and resting and awaiting the sun to return, storytelling was a regular nightly event. Children would gather and listen to an elder tell ancient and tribal stories, sharing love and harmony of the way of life.”

Santa Clara Pueblo is known for some very unique symbolism. The “avanyu” or water serpent is believed to have ended a long drought in the 1600s and was originally drawn by Julian Martinez of San Ildefonso Pueblo. Julian, the husband of the famous Maria Martinez, came up with the depiction that reminded him of water rushing down an arroyo after a summer thunder shower. The wavy body of the serpent represented the water and the jagged tongue of the creature showed the power of lighting during the storm. “Knife-wing” or eagle feathers also appear with regularity at Santa Clara. These feather designs represent the power of the eagle to take petitions from the natural to the supernatural.

Designs from the Hopi in northeastern Arizona also have interesting meanings. One of the most common symbols is the migration pattern. Migration patterns are a combination of curving feathers moving in one direction, often containing many fine lines. The significance relates to the moving of people to new villages to find new sources of food and water.

Kachinas also play an important role in Hopi symbolism. There are more that 300 different types of Kachinas, which are the “ancestor spirits” of the Hopi tradition. These masked spirits are believed to return to the Hopi from the sacred mountains disguised to help the people. The ancestors return wearing masks so that they are not enticed to stay in the village-something they cannot do. Some of the most common Kachina figures are the “Crow Mother,” believed to be the mother of all Kachinas, the “Bear,” a healing figure, and the “Ogre,” a disciplinarian. 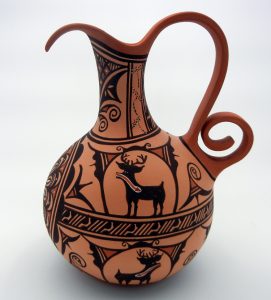 The Zuni Pueblo, in western New Mexico, has  myriad  unique symbols that pique our interest. Frog and tadpole designs are symbols for rain. Dragonfly drawings signify the summoning of the clouds. The “heartline deer,” or “deer-in-the-house,” depicts a deer standing with its mouth open. From the mouth’s opening to the inside of the deer, a brightly colored arrow is drawn, symbolizing the deer as a living being with a long life. Zigzag lines (similar to Acoma’s fine line drawings), representing flowing water, are another symbol used by the Zuni. With regard to the well-known Zuni owl figurine, an interesting quote by Quanita Kalestewa of Zuni explains the symbolism beautifully. “Our grandfather used to tell us that owls helped us fight the wars long ago. The owl would warn us to be alert.” In contrast, she also commented, “Navajo and Apache raiders of the Zuni people considered the owl a symbol of death.” This is a dramatic example of the same symbol have two distinctly opposite meanings.

Navajo art work also includes notable symbols such as the “Yei,” a supernatural being that has more power than humans. Simple male Yei figures are distinguished by their round head, while the female Yei is recognizable by her rectangular or square head. Guardian symbols of the Navajo people include a bat, bow and arrow, a snake and a medicine bag. Finally, symbols of what the “Dine,” or Navajo people consider the four sacred plants: corn, squash, tobacco, and beans, are often incorporated in their pottery and sand paintings.

Understanding the meaning associated with symbols enables us to fully appreciate what an artist had in mind when creating their work.  The symbolism behind each piece provides an added layer of interest and significance, making each piece that much more unique and special.