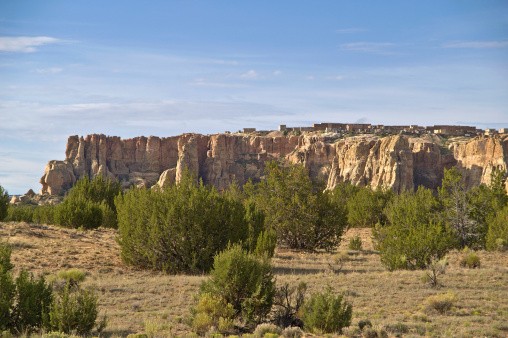 September is full of opportunities to be a part of the rich cultural traditions of the Pueblos. This month, a number of Pueblos celebrate annual feast days in honor of their patron saints and other days with special religious significance.

Long before the Spanish arrived in North America, Pueblo peoples developed their own traditions, art forms and religion. With the arrival of conquistadors, Native American Indians were introduced, and sometimes forced to convert to Catholicism. As the Spanish laid claim to the land and their influence spread, Franciscan friars and fathers founded mission churches.

Although the exact history of how a patron saint was designated for each Pueblo is unknown, the Franciscan friars and fathers may have selected the patron saint based on their own devotion. Patron saints may also have been designated based on the date the mission was founded or dedicated or the date of a Pueblo ceremony in an effort to Christianize it.

In September, four Pueblos celebrate the feast day of their patron saint:

In addition to patron saints, many Pueblos celebrate Catholic feast days to commemorate other saints or important events in saints’ lives. In September, these festivals include:

Although feast days for the saints are Western-/Catholic- inspired occasions, the celebration of these days often reflects both Catholic and Native religions. Most feast days begin with Mass at the mission church either the evening before or morning of the Feast Day. In Pueblos with an effigy of the saint, the effigy is moved from the mission church altar to the Pueblo plaza where it is placed in a shrine covered by woven blankets. Harvest goods and other offerings may be placed on the floor of the shrine at the saint’s feet.

With the saint looking on, the traditional ceremonial festivities begin. These are the events that draw visitors who are interested in witnessing centuries-old dances and ceremonies.

Some Pueblos perform specific dances on Feast Days. For instance, San Ildefonso Pueblo celebrates the Feast of the Nativity of the Blessed Virgin Mary 6 tips to help you identify genuine bodybuilding supplements how effective is clenbuterol for weight loss fda warnings on bodybuilding supplements with Corn Dances while Laguna Pueblo celebrates the same Feast with Harvest Dances (which are also performed on the Feast of St. Elizabeth).

Little is known about Corn and Harvest Dances outside the Pueblos. Because Feast Days are ceremonial (sacred) festivals, the Pueblos prohibit the use of cameras or other recording devices and sketching. Performances are intended to be remembered in the heart.

More is known about the Eagle Dances performed as part of Laguna Pueblo’s St. Joseph Feast Day. Eagle Dances are not unique to the Pueblo peoples—many Native American Indian nations’ ceremonies include these dances, so there is a lot of variation in the traditional dress and actual dances.

In general, these dances are meant to depict the life cycle of the eagle. The eagle is sacred to many Native American Indian peoples because it is believed to be a messenger between heaven and earth—a carrier of prayers. The eagle is also believed by some to control thunder and rain, making it important for the success of the harvest.

During the dances, two central dancers don eagle-like attire. Their movements mimic many daily activities of Eagle, including hunting and fishing. Dancers move to music created by background chanters and drummers.

Of all Pueblo Feast Days, the events of Taos Pueblo’s San Geronimo Feast Day are most publicized. The Feast Day begins with a vespers (evening) Mass the night before. A foot race is held at dawn of the Feast Day. During the day, vendors line the plaza and streets, selling food and crafts. In the late afternoon, sacred clowns (Chi-pu-nah) begin to enter the plaza. The Chi-pu-nah are spiritual instructors and may discipline visitors and tribal members alike. Around 4:00 pm, the sacred clowns will participate in the pole climb. They gather around a large pole and begin to climb toward the top where there is a store of harvest goods. The first to reach them lowers them down to the others.

The Feast Days are religious ceremonies and may be enjoyed by those outside the Pueblo culture. However, the Pueblo does not prioritize explaining or educating the public about its ceremonies. Some members of the Pueblo may offer explanations of the dances and rituals, but asking about the meaning or purpose of the dances, attire, etc. is considered poor form.

Most Pueblo Feast Day events are not tightly scheduled. Dances generally begin around 10:00 am and run through the late afternoon. You may contact the Pueblo’s administrative office for more information, including event parking, shuttles, etc.