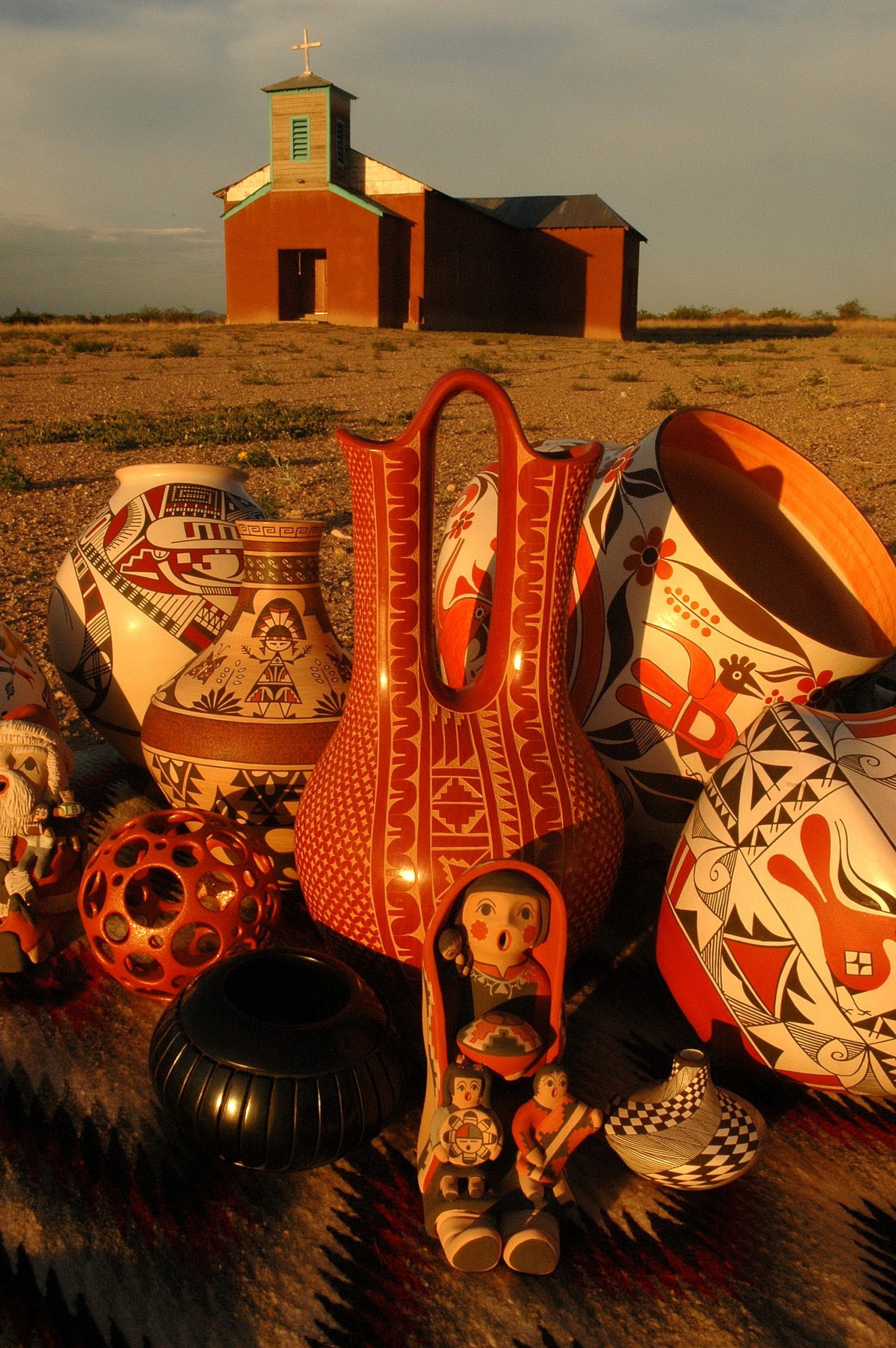 When we say “Native American Pottery,” we usually mean pieces made by Pueblo Native American peoples and by the Navajo.  Although other tribes practice the art, that of these specific groups are best known.  While one tribe often adapts certain features from a neighbor, each has it own distinctive characteristics.

Some similarities between tribes include the fact that each uses clay found nearby, and the method of shaping pottery is the same: rolling prepared clay into a coil, shaping the coil(s) by hand as desired, without the use of a potter’s wheel, and smoothing the surface with a stone or similar object.

Methods of firing between tribes differ, as is shown by the color and finish of each pot. Each tribe also has its own distinctive designs, many of which have been handed down or copied from generation to generation, dating back to prehistoric times.

It is wise to remember that most Native American pottery will not hold water, unless a protective coating of shallac or the like is applied to the inside. While some types of pottery may be wiped down with a damp cloth, this should be done with caution, and it’s advisable only to clean pottery with a dry cloth or duster.

Following are some brief notes to aid in the identification of the various types of Native American pottery we often encounter.

Acoma/Laguna: Light cream, almost white background. Designs are usually red or orange, if the piece is polychrome, and outlined in black. It is said to be the only type of pottery that will hold water (though we still do not advise it unless the piece is glazed inside). Acoma artists also create storytellers, and have perfected the precise art of fine line and eye dazzler work.

Cochiti: Known for pottery sculptures, figurines, and especially storytellers.  The first storyteller originated at Cochiti Pueblo, by Helen Cordero. Cochiti is also known for vessels with clay animals attached to the usual shapes.

Laguna/Santo Domingo/San Felipe/Isleta: Seldom seen except near these Pueblos, aside from Santo Domingo, which is becoming more widely distributed. Santo Domingo also frequently shows a conventionalized flower, often seen in black and white, sometimes incorporating other colors. Isleta somewhat resembles Acoma in colors used, but the designs are usually small and spaced rather than flowing together.

Navajo: Generally a red or brown color, often incorporating some hints of green. Pieces are most often polished with pine pitch.

San Juan: Red on tan polychrome, marked by slight depressions, grooves, or incising all the way around the pot. San Juan pottery is rare.

Santa Clara/San Ildefonso: Each makes black on black and red on red. Sometimes the contrast is obtained by combining a matte with a glossy finish. Other times, the designs are incised so the background stands out in relief. Decorations in contrasting colors are also used.

Taos/Picuris: Very small production, typically with a rough finish and little ornamentation. Pieces are mostly grayish brown or reddish brown, and often distinguished by a sheen due to mica in the clay found around the area.

Tesuque: Rough surface, almost dusty looking. Decorated after firing with very bright show card (water base) colors, which will run if touched by even a drop of water.

Zia: Reddish brown on light tan. Often characterized by the “sky band,” a wide diagonal band, sometimes in a zigzag. A highly stylized bird is frequently used in the decoration as well.

Zuni: Few Zuni women are making pottery today.  Zuni pottery is distinguished by the use of water symbols such as frogs, dragonflies, and the like.  Sometimes these patterns are sculpted and then applied to the pot. Lizards, as well as deer with heart lines, are also often used.