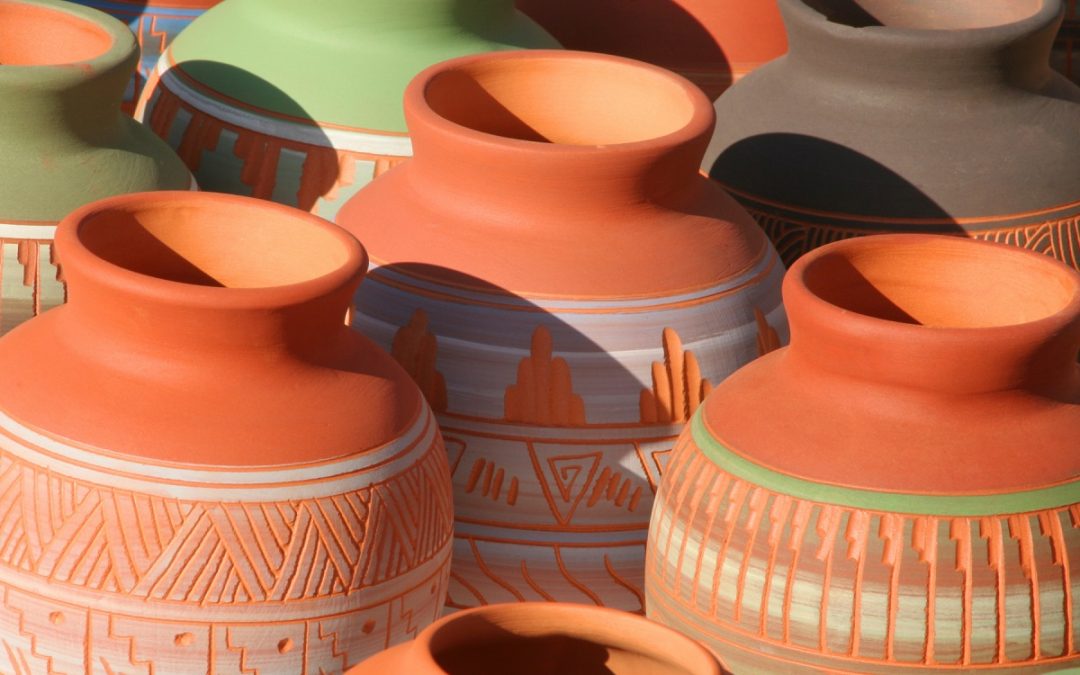 When it comes to pottery, Native American cultures from across the United States have long been celebrated for their beautiful and functional pieces. Whether it’s in the traditional style of Acoma pottery or the ancient and beautiful pieces crafted by the Hopi tribe, pottery has historically, and in the modern-day, played a significant role in the arts and cultural tradition of Native American people throughout the country.

Historical Pottery of the United States

The first records of Native American pottery creation date back to around 4000 B.C. and come from surprising origins. While many people associate Native American pottery with the southwestern Pueblo tribes, the first recorded pieces actually emerged from Augusta, Georgia. Other earlier pieces have also been discovered in Florida and Missouri. The migration of many tribes combined with the trade between different groups of Indigenous peoples influenced the spread of pottery-making techniques both before and after the settlement of Europeans on the continent. Much of this stylistic exchange can be seen in the similar techniques used in traditional pottery crafting amongst many Native American cultures.

There are two foundational pottery-making techniques that many Indigenous craftspeople have historically used, and those include the slab and coil methods. When beginning a new piece, natural clay from the surrounding area is mixed with tempers such as crushed rock, charcoal, or plant fibers, as well as water. Combining tempers helps ensure that the clay doesn’t shrink or crack during the firing process. After this mixing, clay is kneaded to achieve even mixing with the tempers and burst pockets or air bubbles to prevent pieces from exploding during firing. After the clay is well kneaded, it’s formed into the desired shape by either cutting into slabs and attached using a scoring method, or by creating large, snake-like coils laid on top of each other and smoothed into an even surface. After shaping, the piece is polished, decorated, and fired.

Pottery is both Functional & Decorative

While created first and foremost as a functional piece for carrying liquids and storing, Native American pottery also often includes detailed decorative elements. Many tribal pottery traditions apply designs of natural scenery and animals such as deer, birds, or bears to the pottery pieces. Etched pottery is also popular, and this occurs when a potter applies a painted design on air-dried clay and then fires the piece. Certain decorative elements are unique to individual tribes, such as the beautiful geometric polychrome designs from the Acoma pottery tradition. It’s always a good idea to explore some of the unique history and cultural traditions behind each of your Native American pottery pieces.

If you’re looking to purchase your own Native American pottery, Palms Trading Company has a wide variety of authentic and beautiful pottery pieces crafted by local Indigenous artists. Our professional and knowledgeable staff can work with you to find the perfect piece to add to your collection, and also help you learn about its unique history and culture. Get in touch with us today to find your own exquisite piece of Native American pottery!