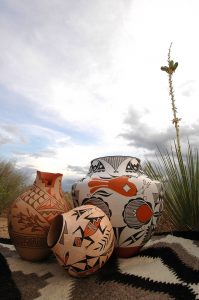 Throughout history, Native Americans have placed high regard on symbolism, ceremonies, and preserving tradition and culture. Here, we outline just a few samples of some interesting stories and symbols from several Native American cultures, pueblos and tribes. 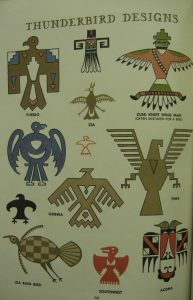 The thunderbird design takes on various forms throughout each pueblo and tribe, each believing different myths and stories.  Many tribes use the symbol to decorate their art, believing the thunderbird to protect individuals and tribes from evil spirits.  On the Great Plains, the thunderbird was considered a deity in the form of an enormous bird, which produced thunder by flapping its wings and lightning by opening and closing its eyes.  These birds were thought to carry a lake of fresh water on their backs, which caused a great downpour when they flew through the air.  Meanwhile, tribes along the Pacific Coast thought the thunderbird caught whales during a thunderstorm and used its wings as a bow to shoot arrows. 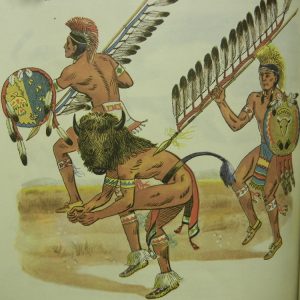 Throughout history, the buffalo has played a large part in the ceremonies and mythology of many Native American cultures.  The first buffalo spirit is said to have been born in a northern cave and was said to have been pure white.  It had great powers in healing, especially wounds.  A white buffalo in a herd is considered the reappearance of this buffalo spirit on earth, and the hide taken from such an animal was sacred and had special ceremonial purposes.  Most of the Plains tribes had buffalo societies.  The members of these groups took part in special buffalo ceremonies and dances, the men having personal names suggesting movements, actions, or postures of the animal, such as “Standing Buffalo” or “Sitting Bull.”  The Buffalo Dance of the Plains tribes takes many forms.  Sometimes a herd of buffalo are represented, with only one buffalo wearing a buffalo mask and a buffalo tail.  Other dancers are hunters carrying feathered lances and shields.

Most Native American tribes consider the eagle a great and powerful spirit.  Its courage is admired, and its strength envied.  The great height to which this bird flies gives evidence that he can reach heaven, and his plumes are said to carry prayers.  The Eagle dance is one of the most graceful of the Native American dances, and the costume is one of the most spectacular of all Southwestern dance costumes.  Eagles usually dance in pairs, but there are some solo dances as well.  There are several kinds of costumes, one of which (shown here) shows up equally well under bright lights or in the half light of a council fire.  The length of the cloth part should be equal to the outstretched arms of an average boy, or about 5 ½ feet.  The costume shown is a copy of one used by the Jemez (Hay-mess) dancers in New Mexico. 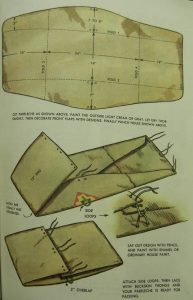 The parfleche is the rawhide skin box or 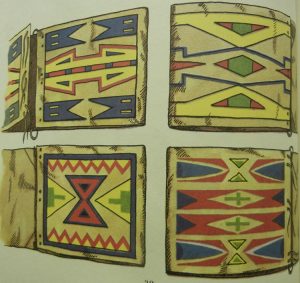