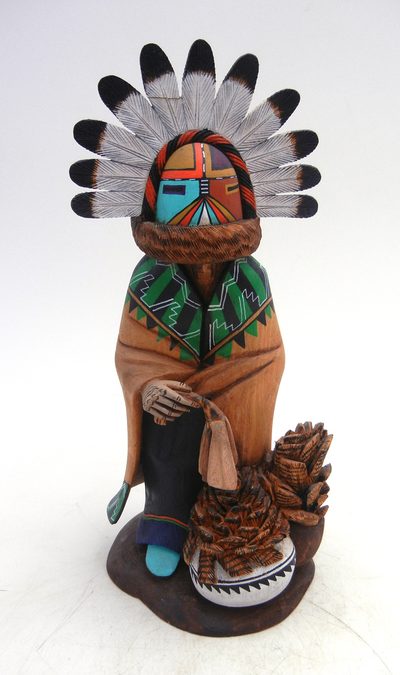 One of the most fascinating aspects of Native American history and culture is that of the kachina doll. achina dolls are crafted representations of spiritual beings that are revered in Hopi culture and have become an integral aspect of modern-day pueblo artistry. Learn more about the history of Hopi kachina dolls and some interesting facts about these unique artistic creations!

The first recorded kachina doll is from the Hopi pueblo community, in what is now northeastern Arizona. Kachina dolls are representations of Hopi spiritual deities, natural elements or animals, or even deceased ancestors. During the period between the winter solstice and mid-summer, the Hopi believe that kachina spirits come as messengers to dictate the weather and harvest and exert other supernatural influences over the community.

The oldest record of a kachina doll is from the 18th century, and this artifact sported a relatively simple design of a flat carving with a head shape and some paint on the torso. Creating kachina dolls became more widespread in the late 19th century; however, as the practice evolved, so did the stylistic and design elements.

The Four Periods of Kachina Dolls

During the Early Traditional Period, from around 1850 to 1910, kachina dolls were relatively simplistic in design and consisted of a carved cottonwood root with basic facial features. The Late Traditional Period was from around 1910 to 1930, and these kachina dolls http://getzonedup.com/modafinil-causes-anxiety/ incorporated more realistically detailed carvings with better proportions and more painting. Kachina dolls from the Early Action Period of around 1930 to 1945 were more articulated with arms and a head that were attached separately to the torso, which could also be moved slightly. Finally, kachina dolls from the Late Action Period of 1945 to the present include full body articulation and feature detailed clothing and decoration.

Kachina spirits are not just represented through the creation of kachina dolls, but also in tribal ceremonies when community members wear masks decorated in honor of specific kachina spirits and participate in traditional dances.

Kachina dolls were used to teach Hopi children about the different types of spirits and provided a valuable educational resource regarding Hopi culture and history.

Kachina dolls can incorporate many different types of materials in their creation- from carved wood to textiles, feathers, and even carved bones and shells.

If you’re looking for beautiful kachina dolls made by local Indigenous artisans, come see all we have to offer at Palms Trading Company. Get in touch with us today and let one of our free personal shoppers help you find the perfect new piece for your collection!