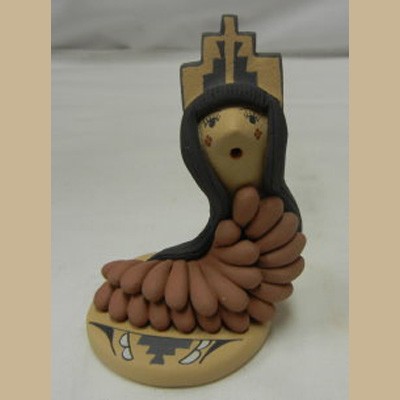 People native to both South and North America are often known as “corn people” because their civilizations depended on the success of corn crops. So, it comes as no surprise that much corn and its harvest plays a big role in Native American Indian tradition and folklore. One figure’s importance to the success of the harvest is indicated by her representation in Native American Indian pottery and stone fetish art forms—the Corn Maiden.

The Story of the Corn Maidens*

According to tradition, Corn Maidens were created in the palm of the right hand of the Great Spirit as guides for the people of the Earth. People were not always able to determine from among the many plants and animals on the Earth what was good for them to eat—what would nourish them vs. what would harm them. So the Corn Maidens were sent to give each clan a single seed of corn that, if properly cared for, would feed and sustain them.

The people took their seeds of corn and planted them in the ground, making a small mound around them. The Corn Maidens sang a song that inspired love and faith in the people. Some people began to tend to the small mound, offering water and caressing the soil around the seed.

Slowly, the corn grew, breaking through the Earth. Like a child, the plant grew strong and beautiful with the love and prayers provided by the people. As the plant grew, the people began to realize how cared for they were by the Great Spirit, and their faith grew, too. As their faith grew, mature ears of corn sprouted from the plant. With the people having the food they needed, the Corn Maidens were no longer needed, and so they returned to their spirit form.

While the Corn Maidens were among the people, some men wanted to make them their own because of their great beauty. To protect themselves, the Great Spirit told the Corn Maidens to place one of the sacred images of the kachina on their heads. Disguised as the kachina, the men could no longer recognize one Corn Maiden from another, making them unable to pursue the Corn Maidens. Most likely, the various disguises inspired the many representations of Corn Maidens in Native American art.

Corn Maiden figures are frequently the subject of

Pueblo art. They are often seen in pottery, usually as a storyteller figurine (left), and as stone fetishes (right). Nearly all Corn Maidens are seen with the tableta headdress associated with kachinas, and many figures appear with corn or have representations of corn integrated into the piece.

If you would like to see more Native American Indian artwork that features Corn Maidens, please contact us to use our personal shopper service.