Storytellers: Connecting the Past and the Future - Palms Trading Company

Storytellers: Connecting the Past and the Future

Home  /  Storytellers: Connecting the Past and the Future

Storytellers: Connecting the Past and the Future 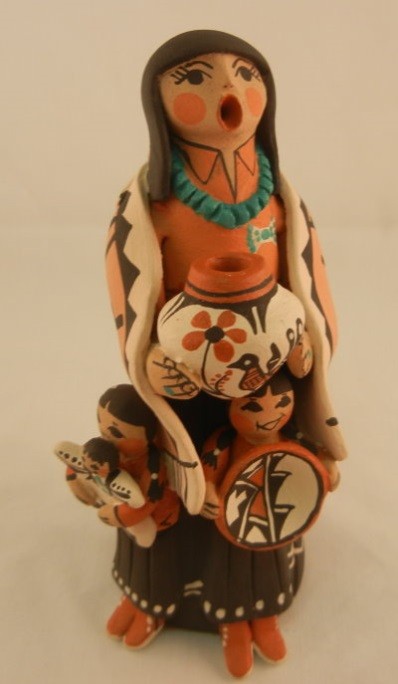 Every culture across the world has stories: stories of life and death, birth and rebirth, creation and destruction. Many of these tales are ancient, passed down from generation to generation until a written alphabet was invented, enabling the stories to be written for future generations to read.

Many Pueblo peoples, however, never created a written tradition. Thus, storytellers have always held a revered place in the cultures of the Pueblo peoples of New Mexico as tellers of tales and keepers of tradition.

The Role of the Story and Storytellers

In her article, “Language and Literature from a Pueblo Indian Perspective”, Native American Indian writer, poet and essayist Leslie Marmon Silko stresses the significance of literature and language as a means to share a message. She writes of the elders at Laguna Pueblo, “as the old people say, “If you can remember the stories, you will be all right. Just remember the stories”; stories are more than just stories; they are a part of the identity and daily life of a culture.

In the Native American Indian culture, stories may communicate many different things:

Most stories are part of a continuum, an ongoing story about life within the Pueblos. They are what sustains a culture and take it through the generations. They are integral to passing the important elements of a culture, its very essence, on to future generations.

Without stories, much of what defines a culture and the individuals who claim to be a part of that culture would be lost.

And without storytellers, as Native American author N. Scott Momaday (Kiowa) writes, “In his traditional world the Native American lives in the presence of stories. The storyteller is one whose spirit is indispensable to the people. He is magician, artist and creator. And, above all, he is a holy man. His is a sacred business.”

Within human nature, there is often a drive to make the intangible tangible, many times to show respect to an important cultural or spiritual aspect. Thus, the art of effigy making is an ancient one. The Anasazi peoples who lived in cliff dwellings in northern New Mexico and Southern Colorado and who are thought to be the ancestors of the Pueblo peoples, created clay effigies. However, it wasn’t until 1964 that Helen Cordero, an artist from Cochiti Pueblo, created the first “storyteller” figure to honor a storyteller in her life. The model of the figure was Cordero’s grandfather, who would tell traditional stories to his grandchildren who gathered all around him.

Today, over 200 pueblo potters create storytellers, including artists from Cochiti, Jemez and Isleta Pueblos. These beautiful pieces of art are usually created using hand-collected clay and fired using traditional techniques. Paint colors, tools, clay, technique and designs are unique to each artist who makes these pieces entirely by hand.

These figurines are more than dolls or piece of art, however; they are works to give respect to an ancient art and ancient artists that are so important to the continuation of the Pueblo cultures of New Mexico.