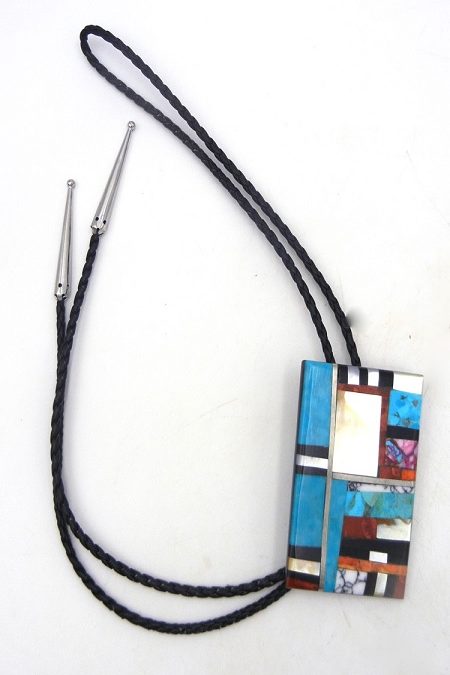 After its invention in 1954, the bolo tie has become a fashion staple primarily among those who live in the southwest. An Arizonian by the name of Victor Cedarstaff is a possible individual responsible for creating the bolo tie. According to historians, one windy day in Arizona, Cedarstaff’s cowboy hat blew off his head while riding his horse. After circling back to retrieve it, he wore it backward, with its silver hat band wrapped around his neck and the peak of the hat jutting in the opposite direction. One of his friends, who was riding with him at the time on a separate horse, joked about the way the hat band settled on his neck, resembling a tie of some sort. Thus, the bolo tie was supposedly born, and Cedarstaff applied for an official patent, which he received.

Another origin story told of the bolo tie revolves around the New Mexican craft store owner Manny Goodman. In the 1930s, Goodman commonly saw Native American people adorning a bandana wrapped around their neck, clasped with a metal piece of some kind. From there, according to other historians, the idea of a bolo tie was born.

The bolo tie, also referred to as a bola tie or a boot-lace tie, is the combination of a necklace and an actual tie. Usually made from braided leather, the tie is folded in half and clasped with a specific part known as a slide, typically beautifully decorated. The tips of each side of the bolo tie usually are finished with metal, also called aiguillettes. The artistry is exhibited in the braided leather and the aiguillettes, but because of the way it stands out, the slide is what people’s eyes are drawn to first, making it the perfect opportunity for an intricate design. The slide is usually made using silver and turquoise, with culturally significant designs stamped onto the silver, or with intricate inlay work.

Because of its popularity among southwesterners, specifically Native Americans, some people are hesitant to wear bolo ties because of the fear of it being deemed cultural appropriation. This is a genuine concern for some because so often has Native American art been exploited by an outside community for financial gain. However, bolo ties are uniquely different due to their origins. Most Native American religions are inherently spiritual, unlike bolo ties, which do not have any religious or spiritual roots. However, they do have cultural roots, which are important to always remain respectful of.

You can find bolo ties sold at a variety of venues. Online stores, such as that of Palms Trading, are home to this culturally significant accessory. Palms Trading’s buyers also work with a plethora of Native American Indian artists, meaning that oftentimes, you’ll even get to know exactly who is creating your bolo tie. Price ranges vary across each individual bolo tie, but you can be sure that you’ll be shopping from the highest quality handcrafted pieces no matter what you choose. Every purchase from us leaves you with a one-of-a-kind piece of the Southwest! You can also shop in person at Palms Trading’s physical store in Albuquerque.

When looking to determine the value of a bolo tie, one way is to check for any stamps on the metal surfaces. This would most likely be on the back of the slide or the aiguillettes. The stamp provides information, such as the material used to create the bolo tie, the age, and the original artist.

When purchasing a newer tie or revamping a vintage one with damage, stones should be tested over time to see which is more suitable for the material of the braided leather. The slide can also loosen over time, but it can be tightened by a professional artisan. Jewelry polishers will also be able to enhance your bolo tie by shining it to perfection.

Much like most fashion accessories, the way you wear them is at the wearer’s discretion. Bolo ties can be styled formally or casually, with collared shirts as a replacement tie, or just around the neck like your average necklace. No matter how you wear a bolo tie, every time you do, you are representing the culture and craftsmanship of the southwest indigenous people, so wear it with honor.

To learn more about bolo ties or to own this culturally significant fashion accessory, contact Palms Trading today!