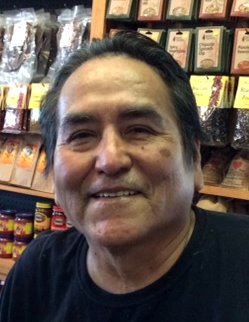 jewelry, has a history steeped in tradition and pride.

Bennie Ration, son of John and Francis Ration, was born into the Navajo nation on March 21, 1955.  Taught and mentored by his parents, Bennie considers them both a constant inspiration.  He began making jewelry at 11, helping his father and starting on copper before he graduated to silver work.  He made his first silver piece at age 16, and his family has been trading with Palms since he made that first piece of jewelry.

Specializing in kachina and animal pieces, Bennie says that the detail of his work requires a lot of patience, but that the end result is always worth it.  His kachinas are drawn from actual dancers, which are then intricately detailed to match traditional designs within his pieces.  His animal jewelry is often created in the shadowbox style, featuring cutouts within the silver and a three-dimensional effect.

A little known fact about Bennie is that he graduated from the University of Arizona, where he studied screen-

printing.  He made t-shirts for a while, before deciding he’d prefer to return to his roots: to silversmithing. Bennie takes great pride in his heritage and his work, which is evident not only in the

level of care he takes to ensure every piece is special, but in the fact Bennie is now raising two very artistic sons, impressing upon them the importance of tradition.

It is our great pleasure to work with Bennie, and we are so proud to be able to introduce him to you, and offer his art.