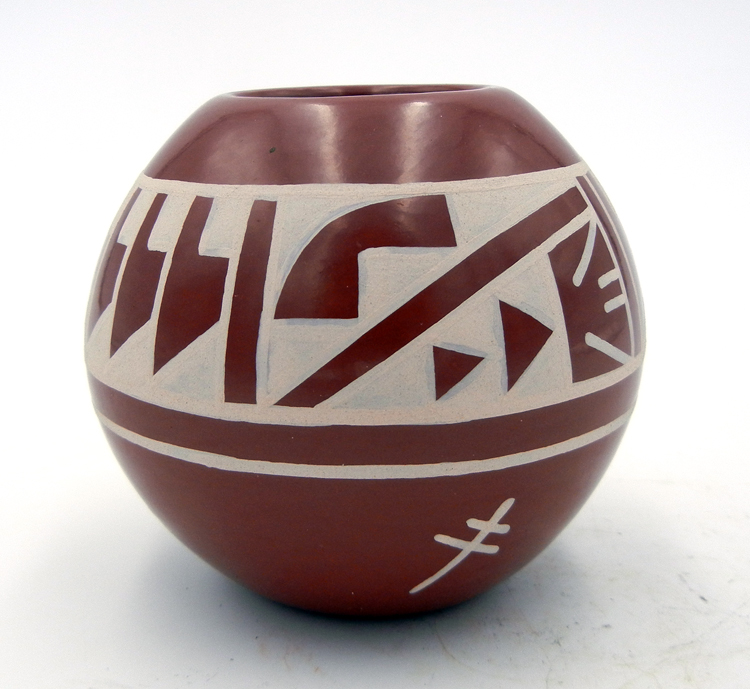 San Ildefonso Pueblo is located approximately 20 miles northwest of Santa Fe, New Mexico. And although one of the smallest Pueblos, it is one of the best known for Native American Indian pottery art.
Shop Now

San Ildefonso Pueblo put Native American Indian pottery (as art) on the map. During a time of economic suffering, one potter—Maria Martinez—revived the tradition of pottery-making, and by doing so, revived her Pueblo’s economy.
Maria Antonia Montoya learned the art of pottery-making by watching her aunt. Although no longer a necessity to Pueblo life, Maria continued to experiment with pottery-making techniques, keeping the tradition alive.

Maria married Julian Martinez, an artist who painted designs on her pottery. Together, they refined their techniques and the black-on-black style characteristic of San Ildefonso pottery.

The couple taught the art to many in the Pueblo and demonstrated their craft at the 1904 and 1934 World’s Fairs and 1914 Panama-California Exposition, making San Ildefonso Pueblo in New Mexico the center of the Native American pottery art world.

Today, many San Ildefonso pottery artists are descendants of Maria and Julian Martinez.

Black-on-black pottery is not unique to San Ildefonso; Santa Clara Pueblo pottery artists create similar pieces. However, Maria and Julian Martinez developed a technique that would allow the paint to create a matte finish on a glossy jet black piece, sometimes called “gun metal,” that become the hallmark style of San Ildefonso pottery.

The designs that Julian Martinez painted onto Maria’s pottery, which have become favorites of San Ildefonso artists, were replicated or inspired by prehistoric patterns. One of his favorites was the avanyu, or horned water serpent with a forked tongue. The wavy body of the serpent symbolizes water flowing in an arroyo after a storm. The serpent’s forked tongue represents the lightning that accompanies the deluge of life-sustaining water.

Palms Trading Company has built relationships with artists from the many Pueblos in New Mexico. As a result, we have one of the largest selections of Native American pottery in the nation. We buy directly from the artists, so each piece is guaranteed authentic—handmade in the artist’s Pueblo’s tradition.

Our online selection of San Ildefonso pottery is only a sample of what we carry in our store. If you’d like to see more San Ildefonso Pueblo pottery, contact us to begin using our personal shopper service.